SARA MCCORRISTON | Sara McCorriston is the co-owner of Paradigm Gallery + Studio and director of Paradigm Art Advisory. Paradigm was founded as a small gallery in February of 2010 and has since expanded to space four times the original size in its current location in the Queen Village section of Philadelphia, expanding its roster of artists and its national and international reach along the way. Throughout this time, Sara McCorriston has served as co-curator and director with her business partner, Jason Chen, and the two have also curated exhibitions of Paradigm artists for art fairs including SCOPE Art Show (Miami Art Basel), Art on Paper (NY Armory Week), and LA Art Show. Sara has had the honor of curating and jurying exhibitions for arts institutions and universities as a representative of the current pulse of the national arts scene, including exhibitions at her alma mater, the University of the Arts.

As a curator and art dealer, Sara also has experience building corporate art collections, organizing and executing public art projects through her involvement with HAHAxParadigm, with partner Ginger Rudolph, and running an annual community art exhibition to invite more people to both make and collect artwork. As director of Paradigm Art Advisory, she manages private and public commissioned artwork, from murals to hotel collections to custom outdoor sculpture, and works with artists from around the globe to create, from start to finish, meaningful collaborations between creators and clients.

JASON CHEN | Jason Chen is from Guangzhou, China. He is a published Photographer specializing in Fashion, Editorial, and Alternative Process Photography. After he received his BFA in Animation from the University of Arts in 2008, he co-founded Paradigm Gallery + Studio in 2010 as well as Juggling Wolf, an animation collective. With his artistic practice, in 2012, Jason shifted his dry plate tintypes practice to photo weaving. He began using two images taken within seconds of each other, then cut and wove them together. Because of his background in film and animation, Jason explores ways to incorporate the “Fourth Dimension” – Time – into his work. Photo weaving allows him to do this by exploring movement and mutation. His artwork has been shown nationally and internationally. Jason is also an award-winning filmmaker. He is currently directing and editing a documentary film about a sculpture permanently acquired by The Navy Yard of Philadelphia.

Paradigm l Paradigm Gallery + Studio® was established in 2010 by co-founders and curators, Jason Chen and Sara McCorriston. The gallery exhibits meaningful, process-intense contemporary artwork from around the world. Now open 12 years, Paradigm Gallery is globally recognized and known as a tastemaker within their greater Philadelphia arts community. As the gallery grows, it maintains its original mission to keep art accessible. Through monthly donations, free public art installations, and initiatives like Insider Picks, Paradigm Gallery, continues to be a champion of small businesses and emerging and mid-career artists. 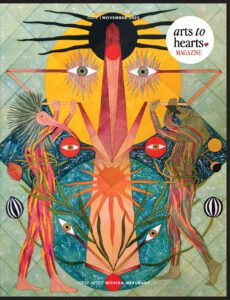