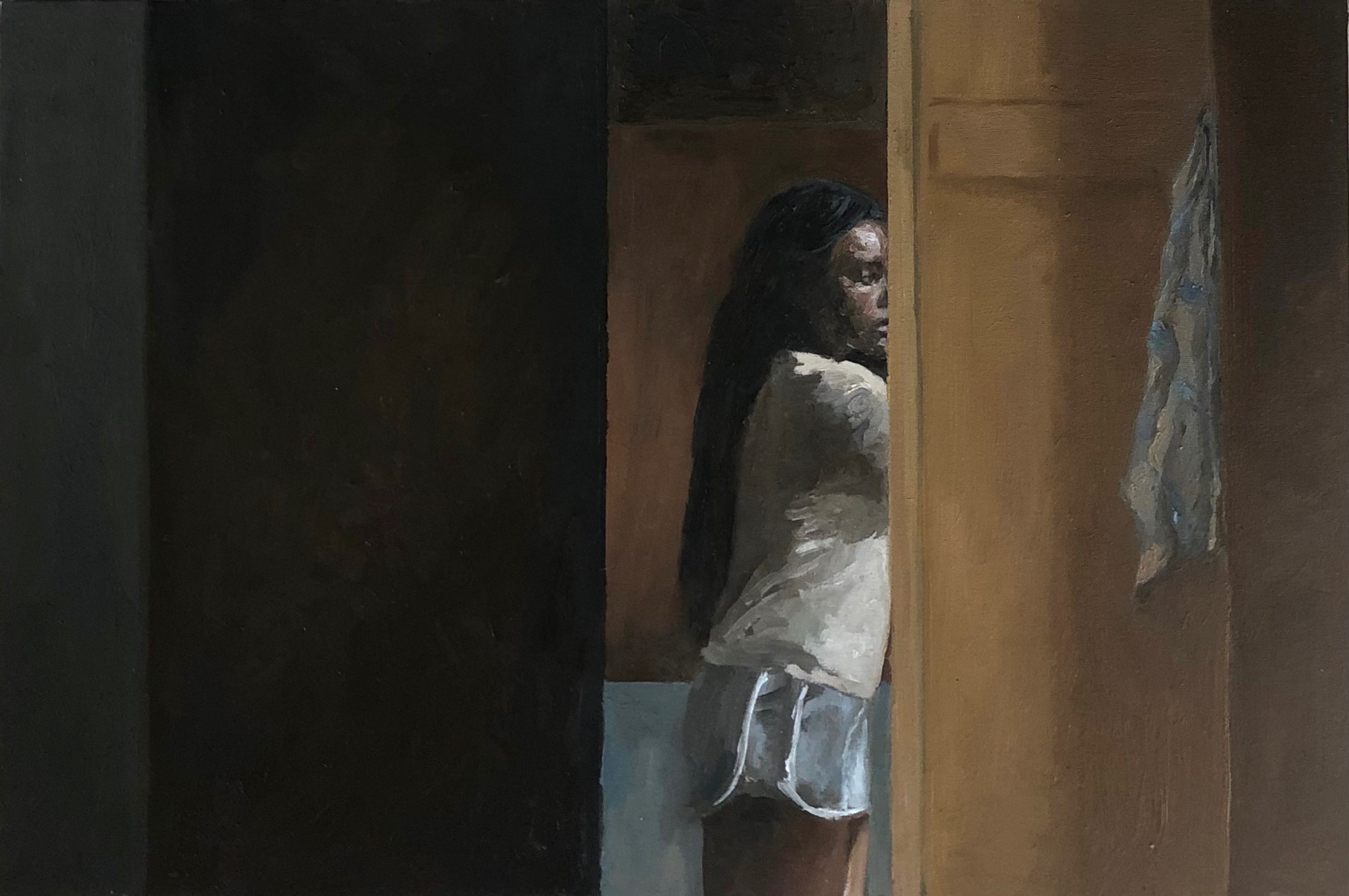 Alexia Smit is a painter and scholar based in Cape Town South Africa. She holds a PhD in Theatre, Film and TV studies from the University of Glasgow and currently teaches at the University of Cape Town where she specializes in feminist screen studies. In recent years she has begun to use her painting practice as a way of thinking about images. Her work in film studies informs her painting which plays with questions of framing, voyeurism and visual narrative.

We live our lives surrounded by screens. My painting explores the looking relations and the narratives that we learn from these screens. I am interested in the way in which fear circulates around women’s bodies and how the stories we tell are based on a visual culture in which gender-based violence is mundane and repeated.

The starting point for this series of works was an interest in depicting voyeurism. This is one of the most foundational concepts in film studies but I wanted to see what would happen when I explored it through painting. I began selecting stills scenes of women under surveillance from mundane crime tv shows as subjects for my paintings. I was influenced by Mandy Patinkin’s comments on his reason for leaving the cast of Criminal Minds. He questioned why the show’s plot formula tortured and killed women on a routine weekly basis. The same observation about repetition and banal violence would seemingly apply to a vast range of crime tv.

My aim was to see what my painting process would reveal about this genre and the social pre-occupations which drive its popularity. The actual TV storylines in which these images are entrenched sometimes offer surprising inflections and reversals of the gaze which are not obvious from a still frame but I am less interested in how these TV images fit within their text of origin than in how they function as part of a mass of repetitions.
Voyeurism is looking at a remove from the object. It is about both intimacy and distance. In the process of painting I enjoyed playing with the pull between the desire to look into a scene and barriers to vision which block and obscure the human figure.

I began my own painterly study of the gaze, thinking of my practice as an intellectual enquiry. But only after I had completed the series, I was struck by flash of recognition in one of the paintings and I was forced to realise that this process was far more personal than I had anticipated. As an undergraduate student I was stalked by a fellow student for period of two years. Looking at my painting of Beck in the bookstore I realised how much it reminded me of the fear I had felt in my campus library when I was cornered by my stalker against a row of books. I have perhaps not been honest with myself about how much of my work is driven by an attempt to come to terms with a constant, violent surveillance. As a woman, even when you are alone, every corridor, corner and dark street calls upon the horror of an unseen onlooker. It is this feeling I explore in my painting.